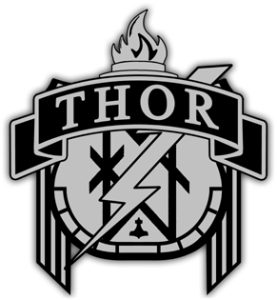 The THOR Crest was created in February 2009 and symbolizes the strength and fidelity of our organization.

Symbols used in the Crest

Torch – A guiding light – a symbol of training and enlightenment.

Lightning Bolt – In ancient mythologies from many cultures (Norse, Roman, Greek, Native American, etc.) the lightning bolt would be hurled by male sky gods to punish, water, or fertilize the earth or its creatures. Navajo myths linked it to the Thunderbird, the symbol of salvation and divine gifts.

Bindrune – This bind is a combination of 4 runes. According to Scandinavian lore, this bind rune will enhance the dynamic power of the user when a ceremony of empowerment has been enacted.